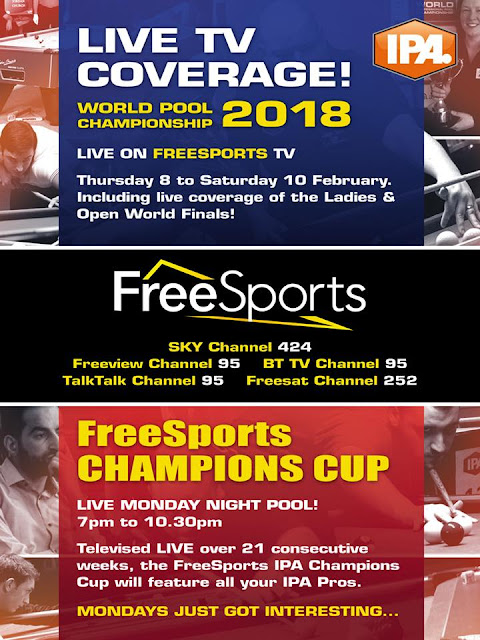 The IPA is delighted to announce that an agreement has been reached and signed, for the IPA Professional World Championships to be televised LIVE on the UK’s only dedicated free-to-air sports channel Freesports.

Three days of coverage from the 8th - 10th February will culminate in the Open and Ladies Finals showcased LIVE in up to 18 million homes. This unprecedented LIVE coverage is a major development for the IPA, the Professional players, and pool in general and will allow millions of people to enjoy the World’s best players in action as Craig Marsh (Wales) and Collette Henriksen (Northern Ireland) look to defend their respective titles.

And in addition to this, we can also announce a brand new event to the IPA calendar - the IPA Freesports Champions Cup. This weekly event will be televised LIVE for 21 consecutive weeks, and will feature all the IPA Professionals doing battle over a series of group stages. The 16 group winners will then feature in the knockout rounds until we discover our new Champion. All matches in the Champions cup will be televised LIVE.

FreeSports is the UK’s newest sports channel and the only dedicated free-to-air sports network. It currently operates on Freeview (95), Sky (424), TalkTalk and BT Vision (95). The channel carries a wide range of sports including Rugby, Ice Hockey, Football, Motorsport, Cricket, basketball and MMA.

IPA Chairman Kevin Barton said “We are delighted to be able to showcase the talents of the IPA players to a whole new audience through our partnership with Freesports for the biggest event of the pool year - the IPA World Championships. The new Freesports Cup will also deliver regular LIVE coverage to sports fan across the UK and beyond in what is a ground-breaking event, and demonstrates that the IPA continues to be the driving force of blackball pool. More people than ever before will now be able to watch with amazement as the skills of the IPA Professionals are showcased live and free and there is no doubt they are in for absolute treat”.
Richard Webb, Channel Manager at FreeSports commented, “This is great news to be able to announce over 23 hours of live coverage from Bradford of the World Championships. We are also delighted to be partnering with IPA to bring live pool to UK homes every Monday night as we find Britain’s best 8 ball player over the course of 21 weeks.” 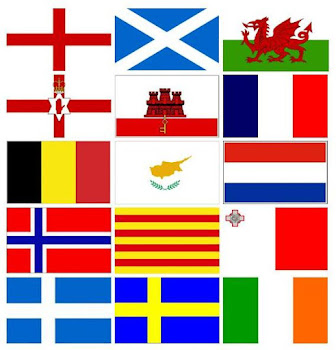